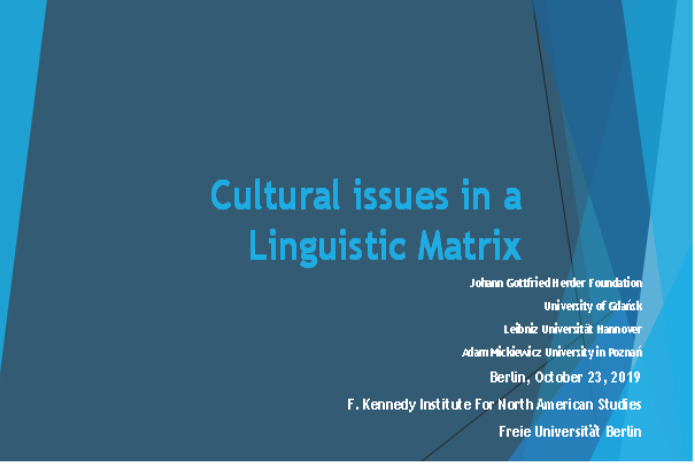 In the days of 22-24 October 2019, a group of students and teachers from The Institute of Applied Linguistics and Translation Studies of The University of Gdansk took part in an academic trip to The John F. Kennedy Institute For North American Studies at The Freie Universität Berlin. The whole endeavor was initiated by our Institute and sponsored by Johann Gottfried Herder Foundation.

Objective: The main aim of the travel was to participate in a seminar titled Cultural issues in a Linguistic Matrix, which was held October, 23rd, 2019 at the JFK Library with the aim of publishing  co-authored chapters (student-mentor) pertaining to cultural issues (German, Polish, English, or other) in a common volume to be peer-reviewed and published by The University of Gdanńsk.

12.40 – 13.00 – Closing, final statements regarding the format of the book, deadlines, etc. Hadrian Lankiewicz

Basing on sociolinguistics theories, the authors will conduct a study among students learning English, German and Polish concerning the stereotypes about these three languages, also called ‘language beliefs’ (Wardhaugh 2006: 53). Apart from the general ‘study of language in relation to society’ (Hudson 1996: 4), the interests of sociolinguists also involve, according to Coupland and Jaworski (1997: 267), the way the languages ‘are perceived’, which signifies not only the people who use them (meaning their nationality or ethnic group to which they belong) and the different accents they speak – it may also refer to the certain pronunciation or even grammar rules which are crucial while learning the second or the third language. An example of such a belief might be, for instance, the popular conclusion that the way of pronouncing words should be determined by the way they are spelled (Wardhaugh 2006: 53) – this stereotype criticizes English, considered to be one of the hardest language when it comes to the pronunciation rules. The authors’ main focus will be on the features concerning certain grammar, spelling and pronunciation aspects of the three languages. The aim of this study will be to research the assumptions about English, German and Polish language and to examine whether and how do they influence the process of learning these languages.

This paper intends to discuss the strategies and techniques applied in two translations of dialogue lists in Monty Python's Flying Circus. The authors analyze ten humorous sketches translated from English into Polish, and subsequently from English into German with a focus on the presence of cultural elements in humorous contexts. It is argued that the cultural perspective of audio-visual translations selected for this project necessitates the adoption of the domestication strategy in both target languages. The analysis intends to investigate the translators’ manoeuvres between the techniques of transposition, equivalence, modulation, adaptation, substitution and reduction (Newmark [date missing]). As a result of the study, it is observed that idiomatic equivalence prevails in the translations of the film sketches.

The paper is divided into three parts: introduction, and two chapters, one theoretical and the other analytical.  The theoretical part elucidates the phenomenon of audio-visual translation and its specificity, as well as expounds the concept of humour and the techniques adopted in its translation. The Semantic Script Theory of Humour (SSTH) developed by Raskin (1985) and The General Theory of Verbal Humour (GTVH) created later by Attardo (1994) are two of the most influential theories of humour, which serve as the theoretical foundation for this paper’s analysis of humour in translation. The practical part compares and contrasts the techniques employed in the translation of humorous sketches into Polish and German, and discusses their individual approaches to the transfer of cultural elements discovered in the source text.

Politeness Strategies across Cultures: How male and female L1 speakers of English, German and Persian encode politeness in English

The notion of politeness is claimed to be a universal phenomenon in human interaction in society. If one fails to convey politeness, communicate sensitivity and show consideration for others, this may lead to a communication breakdown. The acquisition of appropriate politeness has therefore long been recognized as an essential component of a speaker’s communicative competence (see CEFR 2018 ’pragmatic competence’). Research has shown, however, that the degree of appropriate politeness together with the linguistic realisation of polite formulae varies considerably in different cultures (Wierzbicka 2003; Spencer-Oatey et al. 2003). This means that “speakers in a situation of intercultural communication cannot rely on the same set of assumptions as speakers interacting within the same culture” (Zufferey 2015: 17). The cross-cultural differences in the rules of language use often lead to pragmatic failures in EFL learners’ interlanguage, which are rated as more severe and striking by native speakers than grammatical errors (Schauer 2009: 106-107).

A common criticism of the existing body of research within interlanguage pragmatics is the focus on Western ’individualist’ cultures’ realisation of speech acts and neglect of Eastern ’collectivist’ ones (Hofstede & Hofstede 2005).

This study moves away from this “Anglo-cultural ethnocentricity” (Ghavamnia, Tavakoli & Rezazadeh 2012: 105) by setting out to investigate the pragmatic abilities of Persian and German EFL learners in comparison to English native speakers to illuminate cultural differences in politeness strategies. Specifically, requests produced within a Discourse Completion Test by 12 German and 12 Persian students of English in their first year of study will be analysed and compared to those obtained by an age-matched corresponding group of 12 native speakers of English. The observed differences between the learners’ requests will be related to pragmatic transfer from their mother tongues.

This paper investigates nomination strategies based on a small-scale corpus collected by means of analysis of 50 webpage articles, 25 from Polish newspaper “Myśl Konserwatywna” and 25 from German newspaper “Junge Freiheit”, both of which characterise their political stance as conservative. The purpose is to identify nomination strategies, which aim to categorise, denigrate, oppress and ultimately reject the stigmatised or racialised ethnic or national identities in anti-immigrant discourse. Discrimination through nomination is understood as the way people name others and talk about others by setting up identities in an unequal relationship. Nomination can be realised in an explicit or less visible/more implicit way, as for example ethnonyms or bodily meronyms which are discriminatory in a particular context. The texts are chosen on the basis of their topics; they need to focus on migrants or immigration in the respective countries.

Multilingualism in the German EFL classroom – teachers and students’ perspectives

Due to increasing globalization and migration processes, both students and teachers in the German EFL classroom show a high variety of different languages they know and speak fluently or are at least familiar with. This inheres a huge potential, which seems to be used insufficiently with regard to language learning strategies and language (learning) awareness. On the contrary, lifeworld multilingualism and the inclusion of multiple languages in the EFL classroom is rather seen as a problem than as a chance (Elsner 73).  After a short introduction into didactics of multilingualism and learning strategies, this article intends to combine the results of qualitative teacher and student interviews as well as some quantitative data from questionnaires. Whereas the teacher interviews deal with the attitudes and practices of multilingual teachers with regard to multilingual approaches in the EFL classroom, the student interviews and questionnaires focus on decoding strategies students use in reading and listening and compensation strategies used in speaking (both referring to the use of multilingual resources).

On the one hand the results underline that some teachers hesitate to include other foreign languages in the EFL classroom, predominantly when they do not speak these languages themselves. On the other hand, it becomes apparent that teachers tend to include languages from the same language family. That implies that a range of factors influence the decision or possibility to integrate a language into an English lesson.

Moreover, the quantitative and qualitative student data highlights impressively that students from class five to eleven apply numerous decoding and compensation strategies with recourse to their multilingual resources. As this might accelerate their language learning processes as well as their awareness of those, we propose an efficient inclusion of all available languages in the EFL classroom.

This chapter aims to introduce the reader to the sociolinguistic analysis of how the figure of an anti-hero is portrayed in English, German and Polish literature, particularly to the representation of those characters that appeared during the heavily turbulent decade of the 1960s. The historical, cultural and social background of the 60s find their reflection in literary anti-heroes, specifically in the language with which they involve in interactions. Anti-heroes were and are prevalent in literature, and they are presumably here to stay, for their words and actions are universally relatable, simply “human” The first part of the chapter is dedicated to cover selected aspects of sociolinguistic theory and practice.  In the following phase we will take a look at the culture, history and society of the 1960s in America. The next part will introduce the characters of the chosen literary pieces from various historic and linguistic backgrounds. In the analytical section, we will take into consideration aspects of the social situation of characters, namely place, social role and topic. We will put in the spotlight register, politeness and power markers present in the dialogic interactions of the characters. Eventually, we will seek answers to the questions about sociolinguistic and culture-specific determinants of an anti-hero as depicted in the English, German and Polish literary works of the period of the 1960s.

The trip was a good occasion for our students and teachers to visit Berlin’s landmarks, museums and experience one of the multicultural European capitals. 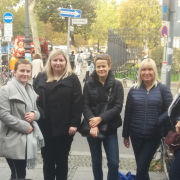 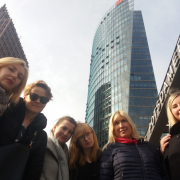 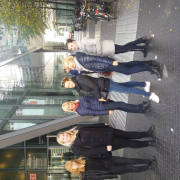 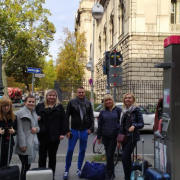 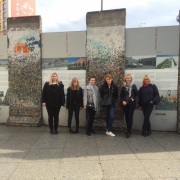 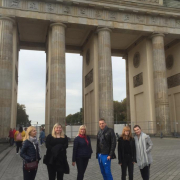 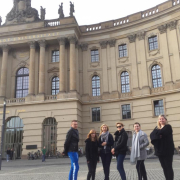 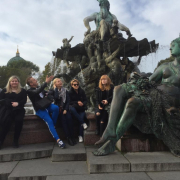 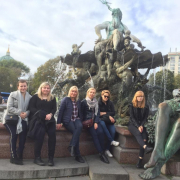 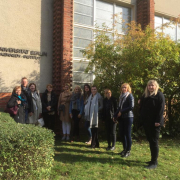 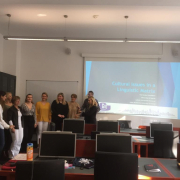 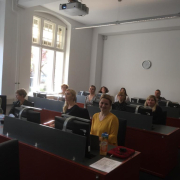