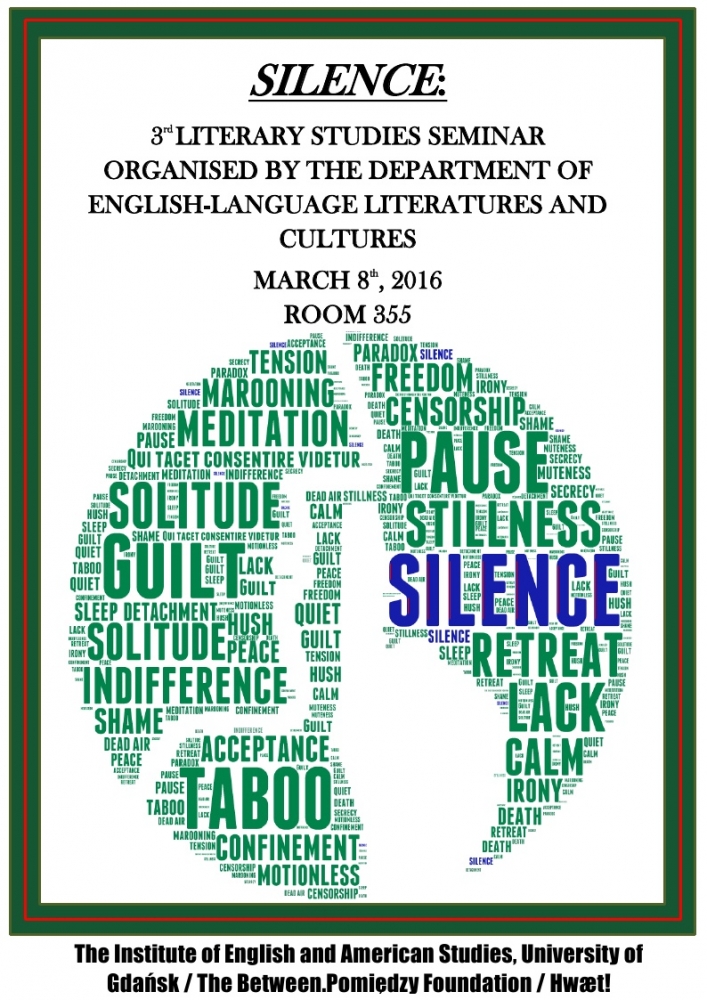 Tuesday, March 8th, 2016
Time to be announced
Department of English-Language Literatures and Cultures
Institute of English and American Studies
For the third literary studies seminar in the series begun in December, we suggest the topic of silence as a (paradoxical) focus for discussion. In art silence can take many forms and fulfil many roles: from momentary pauses in music or writing which constitute a part of a work, to the total abandonment of the medium which is used to create a given piece of art. Among examples of the latter we can mention John Cage’s musical piece of 1952, entitled 4’ 33’’ (Four Minutes Thirty Three Seconds), composed entirely of pauses called tacets, or Robert Rauschenberg’s series of “White Paintings” of 1951.
In literature, there are perhaps some fields in which silence seems to be rooted deeper than in others, such as religious writing or nature writing. Silence as a theme manifests itself in many shapes. For instance, from the perspective of an individual, outer silence, understood as absence of audible sounds or words, can be contrasted with inner silence which has more to do with the state of mind and which is less definable, since for different people it can mean quite different things. We can also distinguish voluntary silence (e.g. keeping secrets, contemplative prayer, meditation, taking vows of silence, living in chosen solitude, spiritual retreat) from enforced silence (e.g. taboo topics, censorship, imprisonment in solitary confinement, marooning). Then there is the guilty silence of collusion which results from indifference or cowardice. These various kinds of silence can be described from many different points of view.
Silence can be “visible” not only in the content of a literary work; it can be a means as well as a subject. It can be located in the gap between the written and the spoken text. Its functions as a means are doubtless innumerable, and we would like to offer an opportunity to explore these functions in English-language literature of all kinds, poetry and drama as well as prose. Following on from the subject of the previous seminar, we also invite discussion of texts that are surrounded by critical silence as well as of texts that give voice to those who have been silent or silenced.
If you would like to present something during this seminar either individually (15-20 minutes?) or as part of a double-act or group (5-10 minutes per person?), or in whatever other imaginative way occurs to you, please send your suggestion by 22 February, copied to Aneta Wadowska (wadowska.aneta@gmail.com) and Aleksandra Słyszewska (olaslyszewska@gmail.com).
Thank you in advance for your contributions and your interest!
Organisers:
mgr Aneta Wadowska
mgr Aleksandra Słyszewska
mgr Roksana Zgierska
mgr Sebastian Zmysłowski
Emilia Lejmel
Prof. UG, dr hab. Jean Ward
The Between.Pomiędzy Foundation
Treść ostatnio zmodyfikowana przez: Anna Malcer-Zakrzacka
Treść wprowadzona przez: Anna Malcer-Zakrzacka
Ostatnia modyfikacja:
Data publikacji: